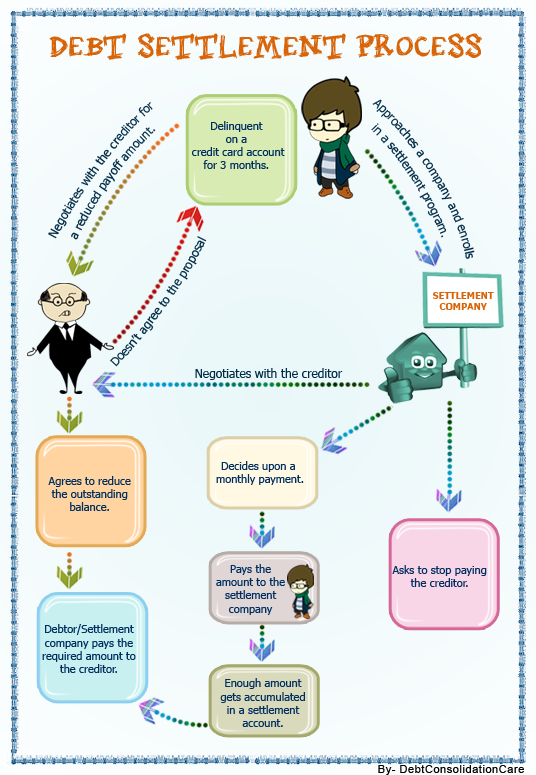 Debt settlement companies, also called debt negotiation companies, claim to assist individuals overwhelmed with debt, however, their services can often come at a very high cost, even beyond their usual high fees. These organizations often tout the prospect of dramatically reducing your total outstanding debt by as much as half. This is not an unrealistic proposal considering that many individuals have multiple outstanding debts. However, it is important to understand that although this may be true, there are more complications than meets the eye. You must also consider whether the reduced debt is acceptable and, if not, what other options you have.

If you opt for debt settlement companies to negotiate your obligations, you do so because you believe that your lender is unwilling to negotiate. Perhaps you have been contacted by a collection agent who has threatened you with lawsuits unless you pay what you owe. Or perhaps you have been told by your lender that if you continue to default on your loan obligation, they will file legal actions against you. In these instances, it is usually hopeless to negotiate any terms with your lender’s, and it would be in your best interest to seek out professional assistance. Nevertheless, it is important to realize that lenders do have legal remedies to force payment and can do so in a court of law.

If you choose to negotiate with your creditors on your own, there are several inherent risks. First, it is important to realize that you may be better off simply paying a portion of your debt rather than face the prospect of having it go up in smoke. Therefore, it is important to be realistic about your ability to pay. On the other hand, if you try to negotiate on your own and fail, you may find yourself in a worse financial situation than before.

One of the primary arguments used by debt settlement companies is that consumers who are not able to pay upfront fees to the company are in danger of being declared bankrupt. This is simply not true. In most instances, consumers need to pay at least some of their outstanding balance in order to be declared financially responsible. If a consumer is unable to pay any of their balance, bankruptcy should be considered as an option.

Another argument advanced by debt settlement companies is that consumers who cannot afford to pay off their debts are more likely to default on future accounts. Again, this is simply not true. Debt relief companies only advance this argument in an attempt to convince consumers that it is in their best interest to avoid a settlement process that requires them to pay an upfront fee. In reality, debt settlement companies charge a modest fee when they help a consumer to achieve a settlement. After all, they earn their money when a client successfully pays off his or her obligations.

There is one more myth that debt settlement programs are run by profit based profit making companies. The International Association of Professional Debt Arbitrators indicates that debt relief companies should never charge any fees until they have fully recovered their costs from a successful settlement program. This is in line with the law. A debt relief program can only take on a limited number of clients before becoming a full time or permanent staff. Debt settlement companies cannot turn a profit without spending time and resources.

Yet another common myth is that creditors typically do not negotiate with debt relief companies because they are afraid that the debt settlement companies may go out of business. Again, this is simply not true. Many creditors typically will negotiate with a debt settlement program rather than file bankruptcy. It is their responsibility to make sure that they are collecting on a regular basis. Creditors typically prefer to settle rather than file for bankruptcy so that they do not have to endure long drawn out court proceedings and end up with very little in the way of assets.

How To Get A Mortgage Quote Online

How to Compare Daily Mortgage Rates

Will Mortgage Rates Go Down Tomorrow?